There’s many a good tune played on an old fiddle and 50-year-old Frankie Dettori delivered a racing symphony on Stradivarius as the seven-year-old brought the house down at York with his third win in the Weatherbys Lonsdale Cup.

Some races just make you smile with satisfaction and the veteran jockey and his partner, unarguably one of the sport’s all-time great stayers, had plenty on the Knavesmire beaming after a dramatic head victory from Spanish Mission after the pair had repeatedly swapped the lead in the final three furlongs.

Any questions about whether he still has an appetite for the game following his fourth to Subjectivist in the Ascot Gold Cup in June were banished by a final rally in the last 100 yards which left Dettori to lap up the crowd’s adulation on a victory parade as Queen’s We Are The Champions boomed out across the track. 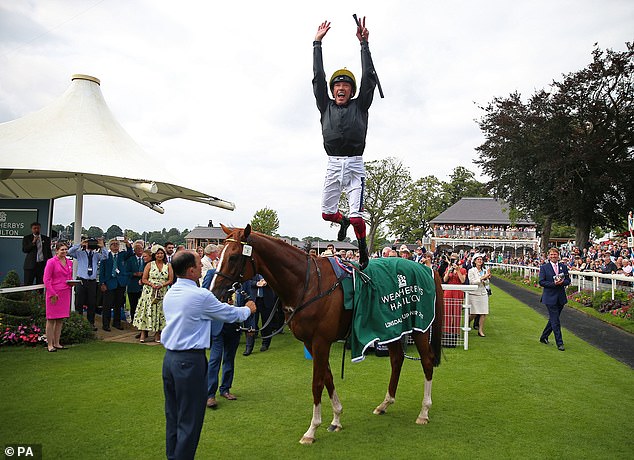 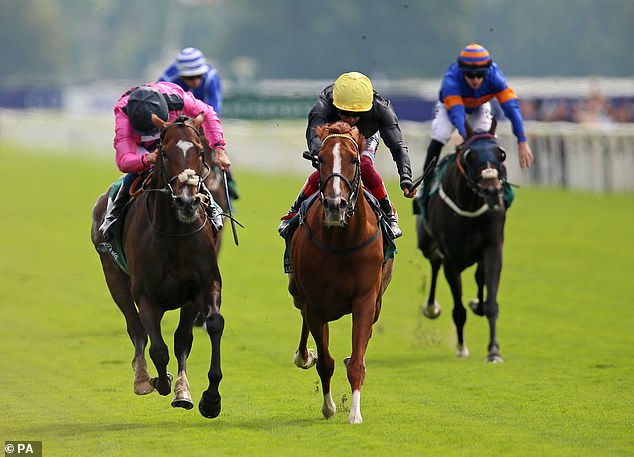 Stradivarius has now won on all five of his runs at York — three times in the Lonsdale Cup and twice in the Yorkshire Cup.

Friday’s victory, the 18th of his career, took the career winnings of Stradivarius to over £3million. Added to that is the £1m bonus for winning a sequence of staying races put up by Weatherbys that he won twice.

And Stradivarius, who has raced over a cumulative 52 miles during his career, has not stopped yet.

After next month’s Doncaster Cup, a return to the Long Distance Cup at Ascot in October beckons and, provided his enthusiasm remains, a return to the track next year as an eight-year-old looks likely.

Dettori said: ‘Spanish Mission passed me twice and the second time I thought: “He’s not going do it today”. Stradivarius knows where the line is. Did you see the reception he got? I was nearly choking — it was great. What a horse race!’

Trainer John Gosden, also successful with Rifleman in the Sky Bet Mile, added: ‘He’s phenomenal, all those miles of racing plus training.

‘He’s a very happy horse. He has a very good sense of humour as well so as long as he’s got all of that, we’ll keep racing. The moment it seems to be fading we will stop.

‘If Frankie could ride the Ascot Gold Cup again he would ride it differently. He sat too far back and got in trouble. I’m not saying he would have beaten the winner but he would have given him a race. That was beyond frustrating.’ 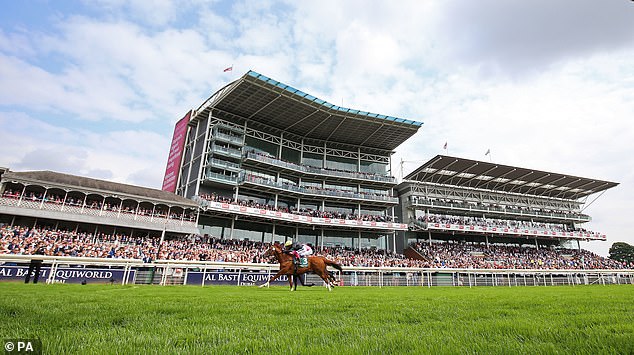 Stradivarius missed the Goodwood Cup as the ground was too soft. Trueshan, the winner of that race, was pulled out of yesterday with trainer Alan King deciding the ground was not soft enough.

If the two are to meet again this season it will be at Ascot.

Unlike stamina-packed Stradivarius, Winter Power is all about blinding speed and the three-year-old filly trained by Tim Easterby proved far too hot to handle with a bullet-like performance in the five-furlong Group One Coolmore Nunthorpe Stakes.

Winter Power, who carries the blue and white colours of King Power, the Leicester City owners, was in front after a furlong and never looked like being caught.

Easterby, whose uncle Mick won the Nunthorpe Stakes 45 years ago with Lochnager, was full of confidence as he gave jockey Silvestre de Sousa simple instructions and the rider’s only worry would have been if speed cops had strayed from the nearby A64.

Easterby, who has now had a winner on the first three days of the Ebor meeting, said: ‘I told Silvestre to just go straight and don’t mess about going anywhere else. Just sit against her and hold on!’ 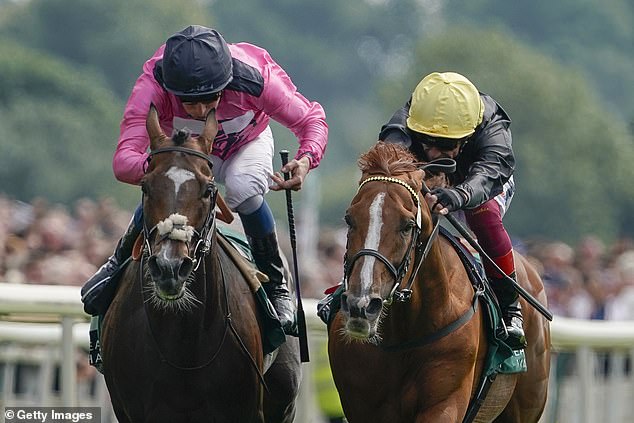 The Easterbys have been one of the dominant forces in Yorkshire racing for three-quarters of a century and Easterby said yesterday’s win gave him the most pleasure since he helped his father Peter train the outstanding Sea Pigeon, who won the Champion Hurdle at Cheltenham in 1980 and 1981.

The fact Winter Power is trained 25 miles from the track made her a popular winner, especially as she saw off French-trained favourite Suesa (fourth) and US-trained Golden Pal (seventh).

It was a Yorkshire-trained one-two with Kevin Ryan’s 40-1 Emaraaty Ana finishing second.