Frankie Dettori has implored owner Bjorn Nielsen to aim Stradivarius at a fourth win in the 2021 Ascot Gold Cup after hailing the John Gosden-trained colt as the greatest stayer he has ridden.

The 4-5 favourite shrugged off concerns about the rain-softened ground to win the centrepiece of the royal meeting by 10 lengths and, in truth, the margin from runner-up Nayef Road could easily have been double.

It was a further eight lengths back to third-placed Cross Counter, the 2018 Melbourne Cup winner. And it was an eighth Gold Cup win for Dettori, while Stradivarius joined 1970s stayer Sagaro as the only three-time winner of a race first run in 1807.

If he returns to the royal meeting next season, Stradivarius will have a chance to emulate the four Gold Cup wins of Aidan O’Brien’s Yeats.

A statue of the most successful horse in Gold Cup history graces the racecourse’s parade ring.

Dettori, who crowned the outstanding victory with his second flying dismount of the week, said: ‘I am so proud of the horse. Even with no crowd, I am quite emotional.

‘He will go down as one of the great stayers and, who knows, maybe we will try for the four wins next year. Bjorn, if you are watching, let’s go for it! 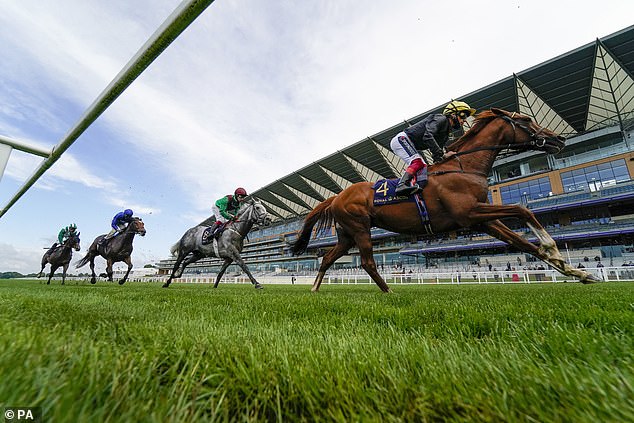 ‘He will go down as definitely my best stayer. I am very proud that one day when I am sitting in my rocking chair I will be able to say I rode the horse who won three Gold Cups in a row — that’s a big number.’

The marathon Gold Cup is run over two and a half miles. With half a mile to go, Dettori was looking over his shoulder checking for dangers. They did not exist as chief market rival Technician struggled. Front-running Nayef Road led Stradivarius into the home straight but with Dettori sitting motionless it was like watching Sir Mo Farah move up on to the shoulder of a club runner.

The jockey added: ‘He went like a hot knife through butter, really. I had everybody covered by the four-furlong pole.

‘I looked round and was surprised to see that they were all spent forces by then.’ 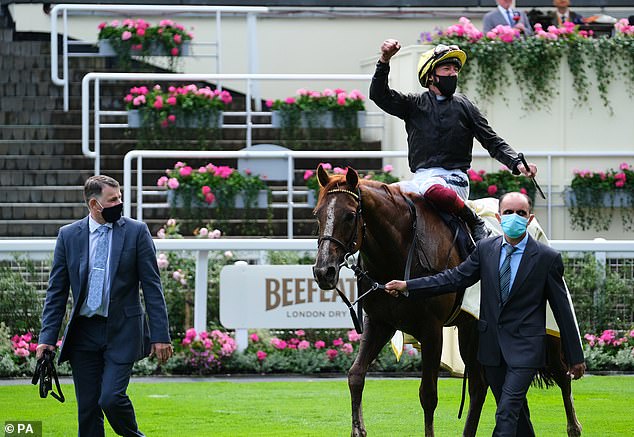 Gosden, who emphasised how important it had been to get a prep race in Stradivarius when he was third to Ghaiyyath in the Coronation Cup at Newmarket earlier this month, added: ‘Sagaro was trained by a great friend of mine, Francois Boutin, and ridden by Lester Piggott. I remember watching all his races and he was something. Yeats was a phenomenon.

‘To have a horse mentioned in that bracket is what it is all about.’

An attempt to win a fourth Goodwood Cup will be next on the Stradivarius agenda and Gosden hinted at a shot at the Prix De L’Arc de Triomphe at Longchamp in October when autumn ground could put a premium on his stamina.

Charlie Johnston, son and assistant to his father Mark, reflected proudly on the run of Ryan Moore-ridden Nayef Road while conceding his admiration for Stradivarius.

He said: ‘There is nothing you can say about the winner that hasn’t been said. It was quite special, actually, standing out the front. There has been absolute silence watching every race go by. There, every single person started applauding. It was quite a special moment to watch.’

The absence of Aidan O’Brien’s Kew Gardens, the horse who beat Stradivarius at Ascot in October, undoubtedly made the winner’s task easier. That is a clash for another day.

But Stradivarius is now in the history books. Watching on ITV was an admiring Johnny Murtagh, the man who rode Yeats to two of his Gold Cup victories.

‘I never thought another horse would do what Yeats did and win four Gold Cups,’ the jockey-turned-trainer said. ‘But this lad might do it.’

He won’t find many arguing. Over to you, Mr Nielsen.