The Queen has had to miss Royal Ascot for the first time in her 68-year reign but the unique staging of the 2020 meeting will still hold fond memories after Tactical carried her colours to victory.

Appropriately, as she is having to watch the action unfold on television at Windsor Castle, James Doyle rode her horse to win the Windsor Castle Stakes by an authoritative length and a quarter from Yazaman.

Trainer Andrew Balding said he had informed the Queen of his high hopes for the colt in a telephone call on Wednesday morning.

Whether a footman was dispatched to the nearest Windsor betting shop is unknown but Tactical was backed from 7-1 to 7-2 favourite.

Having also seen her colt First Receiver narrowly beaten under Frankie Dettori by Russian Emperor in the Hampton Court Stakes, Her Majesty’s racing manager John Warren said that the greatest pleasure the Queen would glean would be from the fact that she also bred Tactical, a son of Toronado out of royal mare Make Fast.

It was her 24th Royal Ascot winner and first since Dartmouth won the 2016 Hardwicke Stakes.

Warren said that would dispel any frustration over not being able to attend because of the Covid-19 protocols.

Warren said: ‘The Queen does not get frustrated lightly. She takes everything in her stride and is pragmatic. It is just the way it had to be this year. 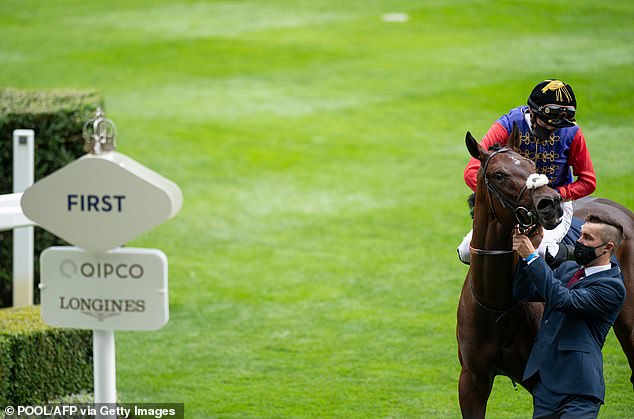 ‘I suspect deep down there was a tinge of disappointment she was not there but it was completely overridden by the fact she had a winner and was proud of breeding it, as well as being delighted for James Doyle, Andrew Balding and the whole team.

‘She probably got a warm inner feeling from pulling this one off.

‘In the last two days she has been able to spend a little bit of time watching the most important races. So this was icing on the cake to have a winner. Every day of her life, the Queen follows racing, one way or another when she can. She would have read the Racing Post in great detail and built up to this week knowing very well the important fancied horses.

‘She studies it in the mornings and dedicates half an hour or so every day.

‘She is very well tuned in and when she watches the racing she is fully up to date with the horses’ backgrounds, who trains and is riding them and the way they are bred because that is her great passion. 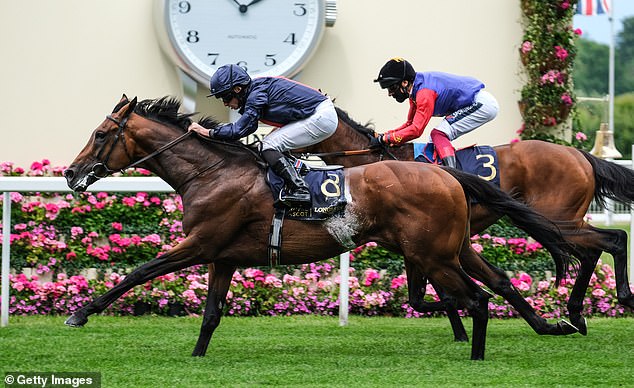 ‘The Queen follows every horse she breeds — she even watches them being born on the iPad if it is at the right time of the evening. So breeding a Royal Ascot winner and following it through all its issues and humps and bumps in the road, will give her special enjoyment.’

For Balding it was another magic moment to his start of the delayed season following his win with Kameko in the 2,000 Guineas.

Balding said that Tactical had always shown signs he could make an early impact in his career. After he had finished third to Eye of Heaven — who runs in Friday’s Norfolk Stakes — on his debut at Newmarket, the decision was taken to aim at the five-furlong Windsor Castle Stakes.

Balding said: ‘We thought Tactical had learnt a lot and would be a bit sharper. That very much proved to be the case. But he still had to get the job done. I think he will be better over six furlongs.’

Races like the Richmond Stakes at Glorious Goodwood and the Prix Robert Papin in France could now be on Tactical’s agenda. 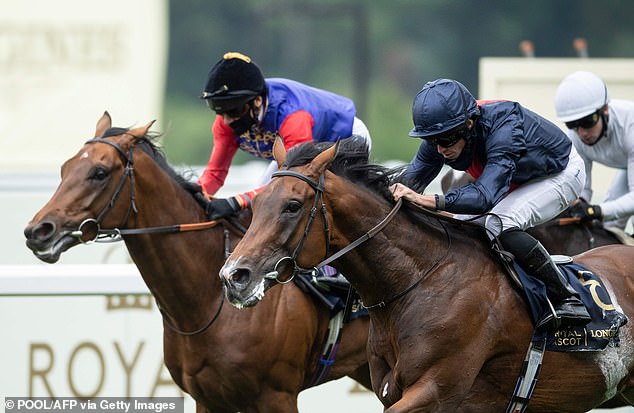 Meanwhile, a decision on whether the Queen’s First Receiver will run in next month’s Investec Derby will be debated in the next few days.

The Sir Michael Stoute-trained son of New Approach looked like making a successful step up into Group Three company when mastering Berlin Tango half a furlong out.

But he was cut down by Russian Emperor, who became the 60th royal meeting winner for jockey Ryan Moore, and beaten half a length.

Coral cut Russian Emperor to 8-1 for the Derby on July 4 while First Receiver is a 16-1 chance.

Warren added: ‘It’s a shame he found a better one on the day but we are pleased that the Queen has a nice horse.

‘We have to get our heads around the big question. It’s a debate we will have in the forthcoming days.’