Tactical confirmed that The Queen has one of the season’s hottest two-year-olds on her hands when galloping away with the Tattersalls July Stakes on the opening day of Newmarket’s July Meeting.

The son of Toronado, who was also bred by the Queen, will now be aimed the Group One Prix Morny as his target at Deauville on August 23 after following up his Royal Ascot victory in the Windsor Castle Stakes.

As at Ascot, the Andrew Balding-trained colt, ridden by William Buick, beat Yazaman a length and a quarter but Thursday’s win was visually more emphatic.

John Warren, the Queen’s racing adviser, said: ‘We might have a very nice horse on our hands which is very exciting. When William walked back in he said this was a proper horse. I’m thrilled for the Queen.

‘I think form-wise that was probably the same as the Windsor Castle, but the way he did it looked even better again.

‘We might look at the Prix Morny as a potential objective for him. He is so laid back and uncomplicated he will handle the travelling (to France).

‘Although it looks like he will stay seven furlongs, at the moment we will keep to what he has been good at for the time being. 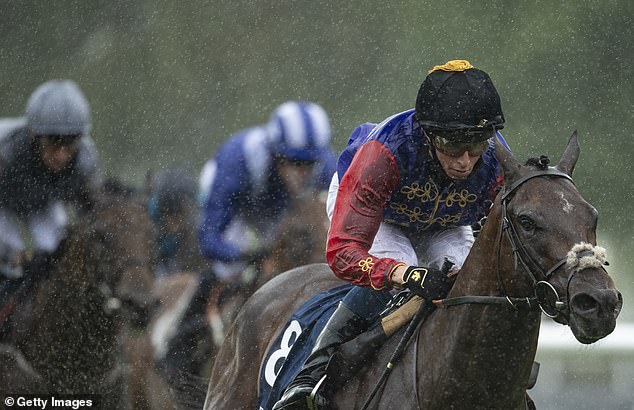 ‘We will run him again over six, then worry about seven after that. He is a lovely, uncomplicated professional with a proper engine, which makes him so exciting.”

Some bookmakers now make Tactical 25- for next year’s 2,000 Guineas.

Balding added: “That was quite encouraging for the future. It is really fantastic for us to have a horse as good as this for Her Majesty. It is really exciting and rewarding.

‘I’m sure there will be some very good horses that haven’t even raced yet and we still have a way to go but he is near the top of the tree at the moment. We will stay at six for the time being, then when we get to the autumn, you have a choice of six or seven.

‘I’d like to see him at seven furlongs before we made that decision (on whether he is a sprinter or miler). The dam stayed seven in soft ground and the sire was a top miler, so there is no reason really why he shouldn’t stay a mile.’

On the day Lizzie Kelly, one of jump racing’s leading female jockeys and the first female jump jockey to ride a grade one winner over obstacles, retired it was appropriate that Hollie Doyle landed the first group one winner of her career on Ed Vaughan-trained Dame Malliot in the Princess of Wales’s Stakes.

The achievement came on the back of Doyle landing her first Royal Ascot winner last month.

Dame Malliot looked like she might be cooked when Communique took over but the 8-1 shot rallied and stayed on stoutly to win by two and a quarter lengths.

Doyle, who in 2019 set a new record for winners for a female jockey in a year, said: ‘I suppose I was a bit of a slow burner until I lost my claim but in the last two years, things have accelerated. It’s my first group winner and it feels good.’ Trainer William Haggas felt Al Aasy might be a Derby horse at the start of the season but that plan was scuppered when he was beaten on his comeback run on the Rowley Mile in June.

That form does not look too bad now with race winner Mishriff going on to win last Sunday’s French Derby.

Al Aasy is 7-1 for the St Leger, the final Classic of the season at Doncaster on September 12, after landing the Bahrain Trophy at Newmarket by a length and three-quarters from Dawn Rising.

The son of Sea The Stars will next be aimed at the Great Voltgeur Stakes at York’s Ebor Meeting next month.

Haggas said: ‘He will be put in the Leger and suspect he will run first in the Voltigeur. He obviously has a bit of talent. He has taken a good leap forward today and he will need another one if he is going to be a good one.’