‘It is the perfect platform we were looking for’: Trainer John Gosden says Enable can thrive at Ascot despite rare defeat in Coral-Eclipse Stakes

Trainer John Gosden said Enable had been given the ‘perfect platform’ to the King George VI & Queen Elizabeth Stakes at Ascot later this month despite suffering only the third defeat of her 16-race career at in the Coral-Eclipse Stakes at Sandown on Sunday.

On her seasonal debut, the Frankie Dettori-ridden Evens favourite gradually eroded the home straight lead of pace-setting Ghaiyyath, who was having his second race of the campaign having won the Coronation Cup at Newmarket last month.

But Enable, who was a head in front of third-placed Japan, never ever looked like she would haul him in as the Charlie Appleby-trained Godolphin runner cross the line two and a quarter lengths in front.

Coral immediately eased Enable’s odds to 2-1 but by the end of the day she was back into 7-4 favourite after hints from Appleby that an immediate re-match in the King George on July 25 was unlikely.

Gosden, who had earlier landed his first ever French Derby with Mishriff, said: ‘I was thrilled with her run. She was favourite but I was clear in my own mind that Ghaiyyath was the one to beat when she was running for the first time since October.

‘We know Ghaiyyath and I had warned everybody Sandown is one of the great frontrunners’ tracks in England. If he gets free in the front, which he did, he is a fabulous horse and you are never going to get to him.

‘Enable has come with a lovely run. Frankie said in the last half furlong she definitely tired. It is the perfect platform we were looking for the King George. 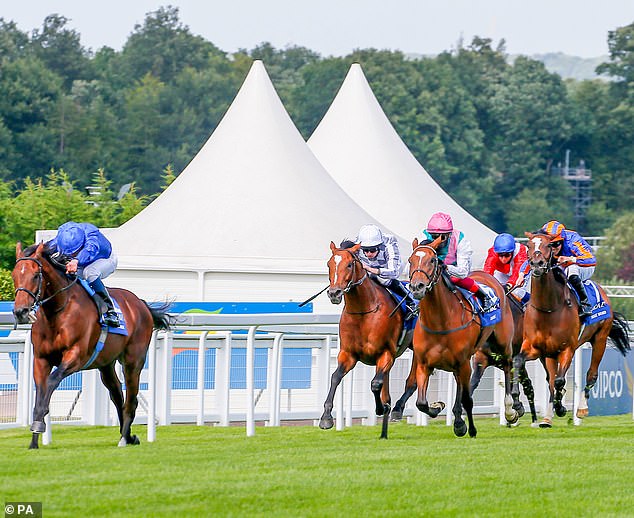 ‘Frankie was thrilled with her demeanour. She enjoyed it and the zest is still there but I did warn everybody about that she is an older mare now and it takes a lot more to get her ready to race.’

The Prix de L’Arc de Triomphe at Longchamp in October is the be all and end all of Enable’s season.

She won the race in 2017 and 2018 and there was a sense of ‘the one that got away’ when she was caught by Waldgeist when going for an historic third win last season, treading water in the final 100 yards on unsuitable deep going after looking the likely winner.

It will not get any easier this season when 2019 Arc third, fourth and fifth – Sottsass, Japan and Magical – are all likely to line up again and now Aidan O’Brien’s devastatingly impressive Oaks winner Love is now in the mix and possibly his Derby winner Serpentine. 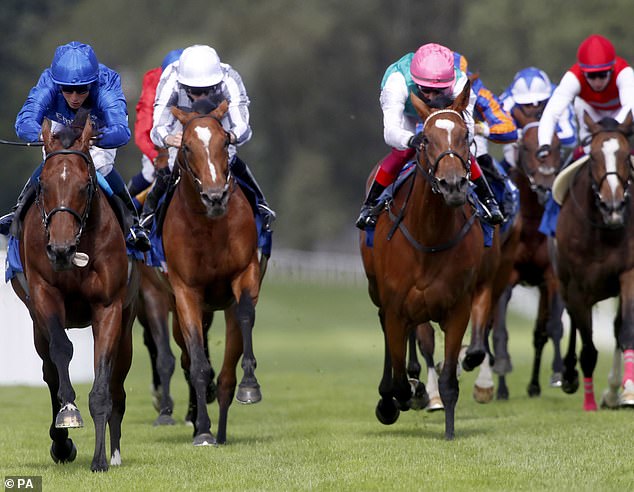 Godsen is an admirer of winner Ghaiyyath (left), who is now favourite for the King George

So is Ghaiyyath. He would not want the ground conditions in Paris to be testing again – he was beaten over 30 lengths in 10th last year – but the son of Dubawi has definitely proved Appleby’s assertion that he is a more physically robust performer this season.

Previously, this wholehearted runner who puts plenty into his runs needed time to recover between contests but yesterday’s Eclipse win came only a month after he galloped his rivals into the ground in the Coronation Cup.

Appleby said: ‘Last year we felt he was a potential Arc horse. Unfortunately the ground went very soft, it was a very strongly-run race and it paid in the end. Our plan was always to work back from another crack at the Arc. If Enable is in it, we’ll just have to take her on again.

‘He’s a horse we’ve always held in high regard and we’ve seen the performances he can put up. He’d been an emphatic winner in France and in Germany and out in Dubai but I think the Coronation Cup win gained him a lot of fans and support in Britain.

‘We had immense respect for Enable, who I felt lost nothing in defeat. It was a great battle up the straight.’

Ghaiyyath is 7-2 for the King George but Appleby, without making a firm commitment, hinted that the preferred option might be to wait for the International Stakes at York in August.

The Arc could also be a target for Mishriff, who survived a stewards’ enquiry to beat The Summit a length and three-quarters under jockey Ioritz Mendizabal.

Gosden said: ‘I thought his most impressive part of the race was the last 100m. He is a proper horse.’