Want an antidote to the depressing furore surrounding Irish trainer Gordon Elliott? You can find it perched high on Exmoor in the shape of Nicky Martin and Bear Ghylls.

With only 10 horses in training in her stable 1,300 feet above sea level, Martin will next week take on the biggest names in the sport with her unbeaten gelding in the Ballymore Novices’ Hurdle.

Success would be the racing equivalent of those David versus Goliath giantkillings which light up the FA Cup. Bear Ghylls, whose price tag of just under £19,000 means he cost a fraction of his main rivals, is a 14-1 shot. 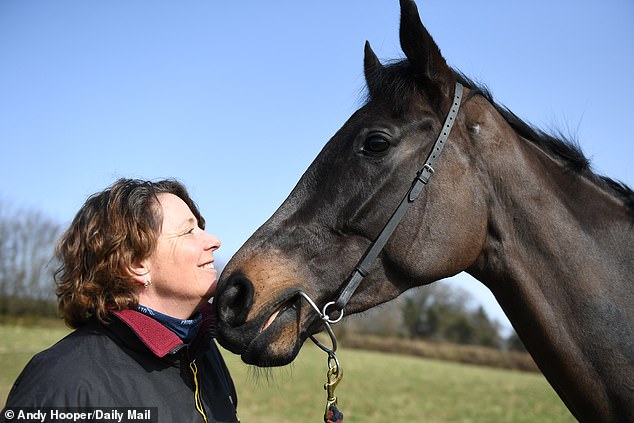 Martin claims if the mount of Matt Griffiths was trained by Paul Nicholls, Nicky Henderson or Willie Mullins, he would be half the price, possibly even shorter.

She has also had to fend off the talent scouts with eye-watering offers for Bear Ghylls to be transferred. Martin’s reason for rejecting those offers is not all about wanting to prove she can compete in the big league.

Her partner, John Simpson, recently received the all-clear after chemotherapy for throat cancer and having a Cheltenham Festival contender in the stable has been a huge fillip.

Martin said: ‘I had an offer after he won his last race, at Exeter. Yes, it was a lot of money but this is a hobby for me. I didn’t buy him to sell him. With my partner being quite poorly, the whole plan has been Cheltenham. It has been something to look forward to.

‘You need a target. That was a lot of the reason I did not contemplate selling him. Maybe in different circumstances I might have done that.

‘But I am very good at buying and useless at selling. I have given so many horses away as hacks and hunters just because it is good they have a nice life.

‘Something could go wrong with Bear Ghylls tomorrow but I didn’t have that money that was offered for him before — that’s my theory.

‘If he was trained by Nicky Henderson or Willie Mullins he’d be 5-1 but I understand that. I don’t see it as an insult. He’d probably be even better if he went to one of them, if he accepted their training regimes.’

Martin is fluent in Italian, having worked in Rome for 12 years, first with showjumpers and latterly with racehorses.

Boxes at her Exmoor base were initially for housing the horses of her international polo-playing son, but when he moved Martin started playing around with a few point-to-pointers.

Martin and Simpson have had horses in training with a clutch of trainers, including Long Distance Hurdle winner Beer Goggles with the late Richard Woollacott, and still have one in training with Charlie Longsdon.

But after doing the groundwork on many of them before they went back to other trainers, Martin, who trains this season’s Welsh National runner-up The Two Amigos, decided on a change of policy.

She said: ‘I started thinking, “Maybe I should be doing it myself”. This is an amazing place to train horses.

‘I have a mile gallop and all that lovely moor. The horses get exercises out there twice a week up the hills.

Bear Ghylls’s form, with wins at Exeter, Ffos Las and Lingfield this season, has been franked by the horses he has beaten.

Martin added: ‘It is pretty exciting and I will probably not be able to sleep beforehand.’