Hurricane Lane just got up in the closing stages to deny Lone Eagle as the British raiders dominated the Dubai Duty Free Irish Derby at the Curragh.

Third at Epsom behind stablemate Adayar, Charlie Appleby made no secret of the fact he expected Hurricane Lane to come out on top that day.

Winner of the Dante Stakes at York prior to his big date at Epsom, Hurricane Lane met with his first defeat there but regained the winning thread under William Buick. 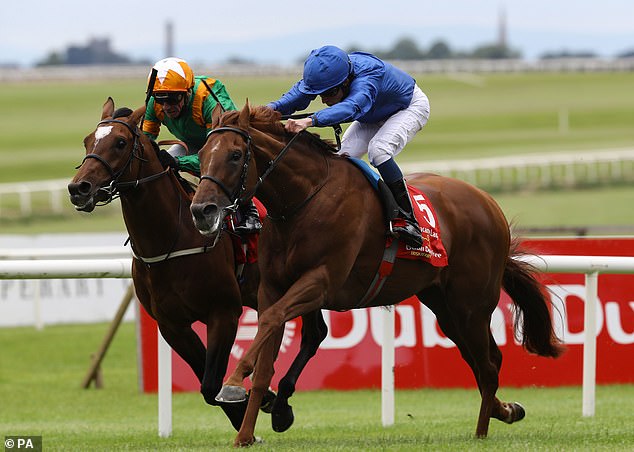 There was plenty of trouble in running for those in behind though, with Hurricane Lane seemingly edging right in the melee, but once straightened out he began to make ground relentlessly, eventually prevailing by a neck.

The pair pulled seven lengths clear of Wordsworth in third, with a stewards’ inquiry swiftly called but the placings remained unaltered. Buick was given a two-day suspension though.

‘Fantastic – this means the world to me,’ said Buick. ‘I must give credit to Charlie Appleby and the team at Moulton Paddocks at home.

‘This horse has done nothing but improve – and he improved since Epsom. We all know that’s not an easy thing to do.

‘I’m in a very privileged position and I must say that I thought halfway through the race that we’d given up our position behind Frankie a little bit, and I thought he’d get first run.

‘My horse quickened up really well and showed a lot of quality out there today. 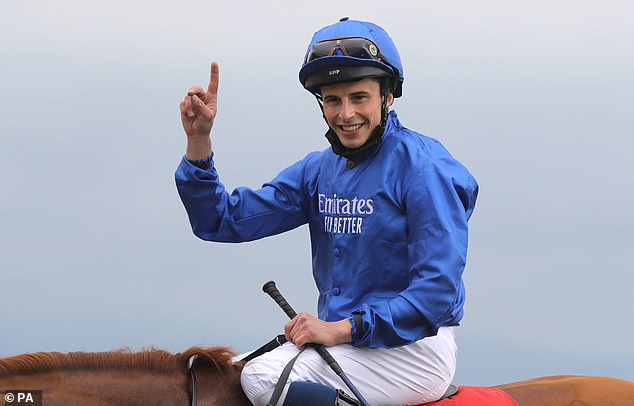 ‘Once I switched him out wide, he managed to get some clear running room and he took off. I was just praying I’d get the leader in time. ‘He’s a very, very good horse. We obviously fancied him at Epsom and today he’s improved again.

‘It means the world to me but I have to give a massive thank you to the team at home and obviously His Highness Sheikh Mohammed as well. He puts so much into it. No one deserves it more than he does.

‘This horse is a slow-learner, a bit like myself, but we’ll get there in the end!’

Appleby felt Hurricane Lane had made significant strides after Epsom and had full confidence in his staying abilities.

He said: ‘I couldn’t have been any happier coming into the race. I felt that he gained experience at Epsom. He surprised me at Epsom as I thought he would travel better but inexperience showed around there. 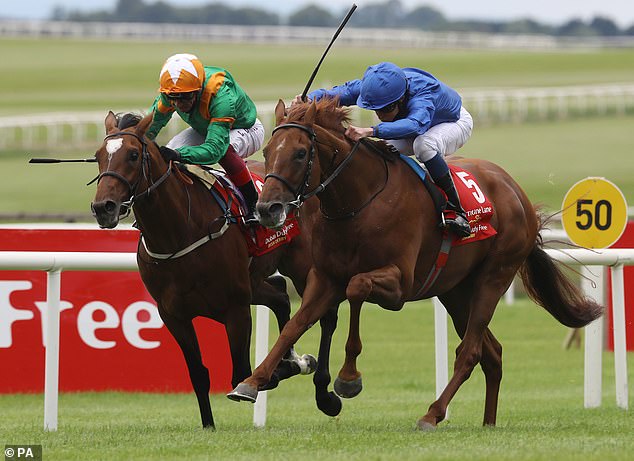 ‘It was noticeable after Epsom how he’d grown up, his work was sharper. The only negative today was the ground tightening up over the last 24 hours and coming down the hill William came under the pump a bit.

‘Once he met the rising ground again, I was confident that he would gallop all the way to the line. I thought that Frankie had stolen a march and he’d be a hard horse to peg back, but I knew our horse would keep galloping to the line.’

With Adayar set to represent the team in next month’s King George VI And Queen Elizabeth Qipco Stakes at Ascot, Appleby will take his time in mapping out Hurricane Lane’s next target.

The big disappointment of the race was the favourite, Aidan O’Brien’s High Definition, who was one of the first horses beaten.

Wordsworth was the best of Aidan O’Brien’s five runners finishing third. It was a second Derby triumph in a month for Appleby after stablemate Adayar won at Epsom, a race in which Hurricane Lane had come third.

‘I was very confident the horse had come forward from Epsom,’ said Appleby. ‘That was a big challenge but he lost nothing in defeat. Coming here I felt the track would suit him and once William got him going I was confident he’d stay well to the line.’