Royale Pagaille is the 8-1 third favourite for the WellChild Cheltenham Gold Cup following confirmation that the progressive seven-year-old will be aimed at the Festival’s blue riband contest on Friday.

The Venetia Williams-trained gelding had never looked likely to take up his entry in Wednesday’s Brown Advisory Novices’ Chase with owner Rich Ricci having Monkfish, the hot favourite trained by Willie Mullins, for that race.

But he was 13-8 favourite in the ante-post betting for Tuesday’s National Hunt Chase after three easy wins this season — the most recent a 16-length stroll in the Peter Marsh Handicap Chase at Haydock — which have seen him take a 31lb rise in the ratings. 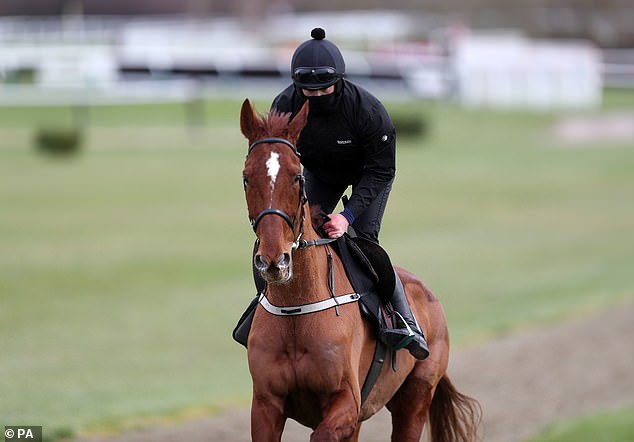 Williams said: ‘We discussed it and we are all happy with the decision. He is going to have to step up again to be competitive in the Gold Cup.

‘The horses are a different class to those he has been competing with. It is a big step, but that’s what racing is all about.’

Royale Pagaille, who will be ridden by Charlie Deutsch, is aiming to emulate Captain Christy (1974) and Coneygree (2015) — the two runners in the last 50 years who landed the Gold Cup while still classified as novices.

Meanwhile, 10 horses have been declared for the Unibet Champion Hurdle including Epatante, the 2020 winner, and Honeysuckle.

With Tom O’Brien standing in for the injured Adam Wedge on Silver Streak, Johnny Burke has stepped in for the mount on Not So Sleepy.

The meeting opens with the Supreme Novices’ Hurdle, which will have its smallest ever field after only eight runners were declared.

Mullins runs both favourite Appreciate It and Blue Lord, who had been ante-post favourite for Friday’s County Hurdle.