Willie Mullins flexes his muscles at Leopardstown this weekend in two days of action that will shape the build-up to the Cheltenham Festival next month.

Ireland’s champion trainer, whose 72 wins make him the most successful trainer in Festival history, has nine Cheltenham ante-post favourites and five of them will run over the two days of the Dublin Racing Festival.

But the most illuminating moment of day one will be the challenge three of his runners can throw down to Honeysuckle — potentially Ireland’s leading Champion Hurdle contender — in Saturday’s Chanelle Pharma Irish Champion Hurdle.

Honeysuckle, trained by Henry De Bromhead, won the 2020 running before landing the Grade One Mares’ Hurdle at Cheltenham with her team not convinced her less-than-slick jumping made her ready for the ultimate hurdling test in the Cotswolds.

The indications are that victory on Saturday would earn unbeaten Honeysuckle a shot at Epatante & Co on March 16. Standing in her way are the Mullins trio of Saint Roi, who easily won last year’s County Hurdle, two-time Grade One winner Saldier and 2020 Champion Hurdle runner-up Sharjah.

The last named was sixth in last year’s Irish Champion Hurdle but three consecutive wins in the Grade One Matheson Hurdle at Leopardstown’s Christmas meeting — the latest with Saint Roi fourth and Saldier sixth — are a better indication of his ability.

Mullins, who runs Kemboy and Melon in Sunday’s Irish Gold Cup, said: ‘I just hope Sharjah doesn’t do what he did last year when he made a mistake at the first hurdle down the back that threw him completely for the rest of the race.

‘Saldier seemed to need the run at Christmas when Saint Roi performed below our expectations. I don’t know if it was our tactics or he just wasn’t right but we were hoping for a much better performance.’

Chacun Pour Soi beat his Mullins-trained stablemate Min in the Dublin Chase last year and the favourite for the Queen Mother Champion Chase will be expected to do so again. 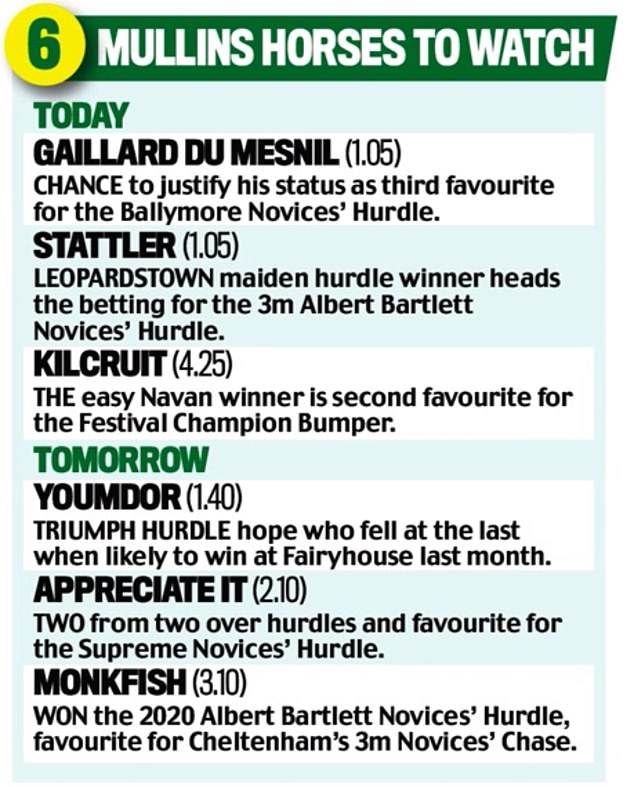 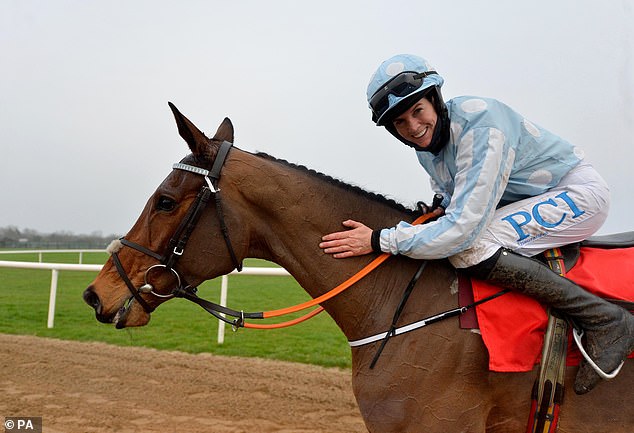 Arguably the most fascinating Mullins runner on Saturday is Energumene, second favourite behind Shishkin for the Arkle Novices’ Chase at Cheltenham and an easy winner of his two chase starts.

Mullins said: ‘He has shown me already that he is good enough to go to Cheltenham as long as he doesn’t make a complete mess of it this weekend.’